Well, here it is. Another year behind us and a brand spanking new one if front of us.
Sort of like a blank notebook page isn’t it. It can be.  It’s time to write out your dreams, your goals and your plans.What? You don’t have any you said.  Why not? Here’s one of mine completed that I think you can learn from.   And a whole lot of valuable stuff tucked inside of it that I learned during this build.

Recently, before 2015 was over, in December, I finally had a dream come true on the farm. But, really, in hind sight,  I got so much more. And maybe, just maybe,  this will be your year to be Sparked  like it was for me wrapping up 2015.

Well, here’s how it played out for me.  For years I wanted a viewing room in our riding arena. A place where families could stay warm or cool and watch their kid take riding lessons. A place to have a chili supper or a board meeting or a pony party or maybe do some yoga if that be our future. The ideas were endless.

“I couldn’t be the falling star.”

Something always got in the way,  the money, the time, and  so-on and so-on.   Money was spent elsewhere, like on a  failing tractor or roof repair and such. Know what I mean? Then magically, unexpectedly, the stars aligned one morning in December,  when I might add I least expected. I had put it out of my mind, mostly. But the timing was RIGHT.  I had the time, I had some cash and we had a greater need now more than ever to get it done. I declared, “Its now  or never.” I called my carpenter son, “When can you come and help with the project.” He said, I have a slow holiday week, next week. Get the lumber order together and I’ll need a helper. That would be you right?” I choked on that a bit. I was rusty. Back in the days of my youth, there was no fear in any of that,  but we become complacent, or at least I had, especially with challenges. I wasn’t as agile climbing a ladder these days either.  But now I was being challenged and I would either make or break this dream of mine. The stars have aligned don’t  be the falling star. I gulped.  “Okay. I can do that.” He laughed. “Yes you can. I have faith in you.”

How could I let him down? 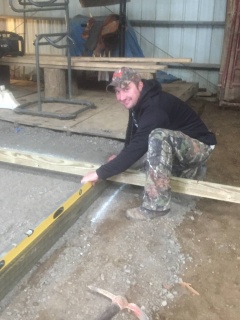 So immediately, with pencil and paper, I pulled  the building from my mind’s archives. I measured the placement area. A 12X24 would fit nicely.  I thought about many things and transferred my ideas onto paper. Then I calculated the lumber. This wasn’t completely new to me. I had done this kind of thing before. Only thing was, 20 years had crept in between the “then and now.” But, the stars were aligned and I couldn’t let ME be the falling star I kept hearing in my minds ear.

“Never, never give up on your dream.”

So I drew in  many deep breaths and  rethought the plan and presented my son with a materials list and a picture from the Internet.  ” Here’s a Western Theme front I want this to look like. Is it possible?” He looked at it and said he could do it. I nodded. Great! I did the happy dance.    I wasn’t too far off in my lumber calculations either. That boosted my confidence that even though  I was older I could  still participate in the game. Not be a bench warmer.

With his review and approval, the lumber material was ordered and set to be delivered the next day.  In the meantime, we leveled the gravel base the skid runners  would sit on and the building would  be built over. Over and over we leveled and taped the diagonals to make sure it was square. “It has to be or everything will be off,” he said; smiling when it was right.

The day the lumber arrived  was magnificently wonderful. I love lumber and when I see it I immediately want to start building something from it. And when its a day your dream is coming to fruition, its even more wonderful.   Never give up on your dream. God’s delays are not His denial it says somewhere.

My dream was hatching from my head like a baby chick.

We had no blueprints only a dream coming from inside  my head, scratched out on paper used as our blueprints.  That was cool. We owned this. Right or wrong.  One thing I have never been good at is one, measuring and cutting precisely and forget about cutting angles. But he is a trim carpenter and his cuts and angles have to be precise. When I agreed  to being his helper,  I was only expecting to be a gopher (Go-For).  Get this, hold this and so on. Which I did a lot of but he did most of the work. However,  I wasn’t expecting to be cutting. But I had too he said.

At the saw, nervous as can be,   I cut one board too short (that’s been my story most of my life measure twice cut short twice) has been true for me before. But during this build  I realized it wasn’t the end of the world.”That’s why we order a few extra,” I was reminded.  It cost me $2.54  for a one wrong cut on a wasted 2X4. NOT THE END OF THE WORLD.  And  it was used later in the build anyway.  But that is what I needed. The failure made me  put my mind to it and “get it right.”  Others can do it and so can I,  I  reminded myself. (Remembering  the measurement called out was hard, so I just learned to help myself by writing it on the board immediately.) Whew!

The final day came, four days in all from leveling the gravel to putting on the trim on the upper facade. I’m on the ground at the chop saw.

The final morning was to wrap up and  to complete the Western Themed facade. He was on the top deck measuring  and needed me to cut.  I took one look up there and I knew this was going to be precision cuts. “I don’t think I can do this, Andrew,” and I hung my head like you do in school when you hope the teacher will pick someone else.” He thought, “Then can you come up here and call the measurements down  to me?” Oh my gosh. He had me. “No, I can’t do that either.” He stared at me. “Then you are going to have to run the saw. You can do this.” I knew I had to try and give it my all. I took a deep breath, said a prayer and reached down for confidence and  called out, “What’s the first one?” He smiled real big, just like my Dad did when I was a kid and accomplished something.

You know that saying about  the first step being  the most important? Well, it is indeed.  Look at the next  picture. I proudly tell you I cut every one of those angles and lengths. One cut I’ll never forget:  A 26 degree angle. Done. Returned. Shave ever so slightly.  Oh my. I did it.   I couldn’t be prouder.  As they say, “I was back.” My long time coming   dream had come to fruition. And, I am so  thankful that I was literally a part of it. My hands,  guided by my son, my flesh and blood, did it.

Now, I am challenging  myself for 2016 and I challenge you.  I now know I can build that little greenhouse I have wanted for such a long time, especially since my other one got torn to shreds in the winter winds a couple years ago.With paper and pencil and surfing Pinterest I have another build coming up and I couldn’t be happier. And I bet you have things you want to do. Something you’ve been putting off. Not necessarily a building but something you’ve wished for a long time.  Roll up your sleeves and get started And for goodness sakes, don’t be your “falling star.” Be your  Super Star.

SO HERE’S THE THING: What are your dreams? What goals have you made? What are your plans. If you can’t answer these, then you have identified a problem. So what’s holding you back? Take charge. Make a change. I’m over fifty. Things are NOT as easy as they once were but I’m making a come back. Dust yourself off, this is your year. Make it a good one. And by all means,  know that if I can make a come back and over come my fears so can you.