“How in the world did we survive?” We both laughed, then  sipped our coffee, as the  memories came flooding back to us…………. 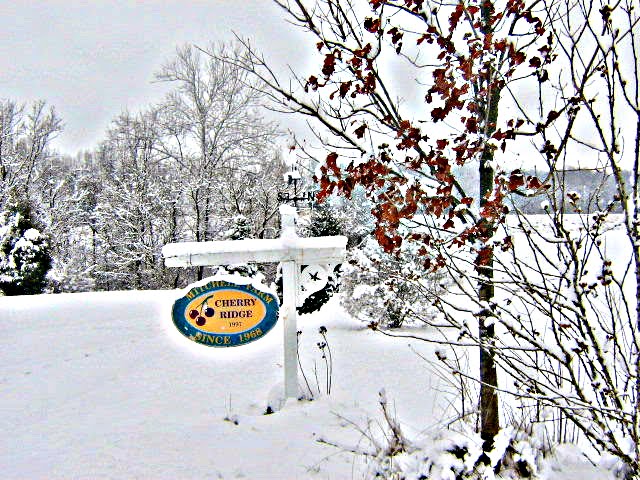 It has been cold here in Ohio.

Subzero temperatures last week,  more snow this week, and on top of this an ice storm. We all feared the horrible return of the ice storm that knocked out our power in 2004 for days on end. You must admit, the snow and  ice does make a beautiful canvas.  I took  some beautiful photos while outside.    I scattered them throughout this story for your enjoyment.

I dreamed of owning my own farm someday………..

Once again,   I headed back up to Mom’s to plow her driveway.  Yes, I  drive the tractor and plow all of our  driveways, four total.  Yep, you heard that  right. I have always loved driving the tractor.   I used to watch Daddy do it  when I was a small girl on the farm  and I was  very inquisitive  so  I learned from him. Often,  I would be  riding the tractor next to him  and him schooling me.   I dreamed then   that someday  I would have a farm too.

After  my  snow plowing was complete, the laughter began!

Mom invited me in for a cup of coffee to warm up. I stripped off my Camo-Coveralls, Muck  boots and Carhart hat. Yep! That is proper farm girl wear here on Cherry Ridge Farms. The coffee was hot and warming.  Next thing you know, we did it again and  began reminiscing  about surviving such winters of heavy snow and zero degree temperatures in a farmhouse that had zero insulation.

You might be thinking this is an overstatement. Well it is not an overstatement. You do know, right, that old farmhouses “did not” have insulation in the walls or the ceiling or the floors?   Forced air furnaces? Notta.   It wasn’t only our farmhouse, it was all old farmhouses built at the turn of the century or earlier.  So to say they were drafty and cold, was an understatement. To survive the cold took wisdom.

We, like most,  did have “central heat”, meaning  it was a heat stove  centrally located on the first floor in the center of the house. Pretty clever! Central is the key word here!  It is  actually radiant  heating……..  real close to feeling like you have none, unless you are standing next to it. Some families had wood stoves, but ours was propane and automatic, Yay! Daddy worked at Ford Motor and farmed too. So there was no time to cut wood.

“How in the world did we survive?” We both laughed, then  sipped our coffee, as the  memories came flooding back to us………….

On winter  mornings,  Mom would come creaking up the steps……..

to wake us for school. I would be up before she opened the door.   Grabbing  my clothes  laid out the night before,  I made  a quick get-away to the downstairs family room where  the large space heater was burning bright. I laid my clothes next to it on a chair  to warm up and after I warmed up a bit next to it,  I scurried  to the only bathroom that served  seven people. Today’s folks could not do it. We did and never was there a line waiting.  We scheduled our visits so to speak!

I dashed through the kitchen, then the laundry, to  finally reach the bathroom, it  being the furthest room  from our  main heat supply. Cold? Did I mention cold? Yes, the toilet seat felt like a slab of ice. But that was better than using the Outhouse that was still on the property.  Though mom had just turned on a space heater it hadn’t had time to warm the room up but toasted my toes while I peed.   Most winter mornings,   Mom would also have the oven door open in the kitchen, subsidizing our central heat with oven heat. It felt marvelous to stand in front of it until your forehead felt scorched!

of course was when mom would  be fixing us “hot” oatmeal and “hot” chocolate for breakfast. The oatmeal was boiled in a pan on the stove.  I especially loved maple syrup over mine with some milk. Then  I would scoop it up with  my buttered toast.   The hot chocolate was also made in  a pan on the stove from a recipe on the side of the Hershey can.  It is so much better than today’s water mixes.  Sometimes, especially if the water pipes had  frozen in the night, she would get distracted and scorch the milk. I drank it anyway happy for the warmth it provided. And as you might imagine, you can see why we all  loved it when she made her potato soup or chili,-a wonderful, wintertime meal! Helping to generate internal body hear!

are inevitable in a non-insulated house.  To try and prevent  frozen pipes, the night before, she opened the cabinet doors under the sink  and allowed the faucet to drip, sometimes run slightly if it was going to be zero.  “If you keep the water flowing, it doesn’t freeze so fast.”   She  didn’t like using space heaters, especially during the night,   or we could have had one in everyone’s room. ” They could cause the wiring in this old house to overheat and  catch fire. And they are too costly to operate.” That’s why we didn’t have them as supplemental heat. If you could get to the water pipes you could use heat tapes but a direct draft on even the most minute spot would freeze it. By the time we returned from school, the pipes were always unfrozen.

Straw bales for what?

To try and  keep the house “warmer” in the winter,  it was very common place to see straw bales around the exterior of  farmhouses to block  winter’s drafts.  ” I feel a terrible draft on the floor in here. Could you put some straw bales out there?”  And next day Daddy would. They stayed there all winter.  Sometimes if the winter was especially cold he would stack them two high or two deep helping to  protect our water pipes from a hard freeze.

Newspapers did more than provide the news…………..

Newspaper was a great insulator, at least to help stop the draft around windows and doors.  Heavy curtains drawn at night  also helped insulate the windows. And if the draft coming in around the North facing  front door was especially bad, mom would find two nails and hang a blanket over it. “Daddy always schooled that a draft could kill an animal quicker than anything.”   Then too, there was a rolled up towel or rug at the bottom of the door to stop the cold air there too. Old doors didn’t have door sweeps to cut the draft.

The best Christmas presents in a drafty old farmhouse………………..

And lastly, to survive the cold , some of the best Christmas present were flannel pajamas, slippers, a heavy robe and of course insulated underwear and heavy wool socks.     We did  have   knee high socks for  bed and we wore them to  school too. We never saw snow on our blankets like  Laura Ingalls Wilder describes  in the surveyors house  but we saw  our breathe on many mornings.

All to soon, my visit came to an end.

My body was warm,  my coffee was finished  and it was time for me to head back to finish my own driveway. I smiled all the way back home, admiring the beautiful ice and snow.  My heart was full of thanksgiving remembering that old farmhouse and  thankful for the afternoon spent reminiscing, that  the snow plowing had afforded me. 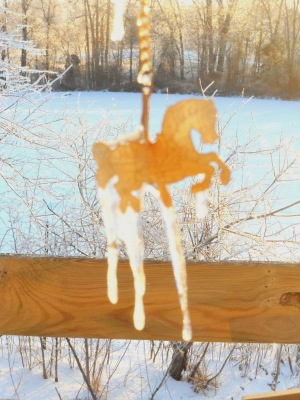 So Here’s the Thing: All along the way I was learning. Granted,  we do have insulation in our modern day homes now and  a single bath is practically unheard of.  But the truth of the matter is, we were surviving. We watched our parents use their heads  to survive.  Later, they  put insulation in the attic, installed a forced air furnace,  had aluminum siding and storm windows  placed on the exterior of that old farmhouse.  The house was warmer, not by today’s standards,  but never as warm as my heart was for that place.  Our bellies were always full and there was always so much  laughter among us,  for we learned to laugh with our circumstances until they could be improved and to be grateful for what we did  have. The laughter today,  as it was then……………absolutely priceless.