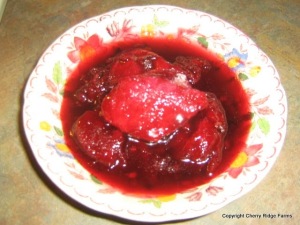 Sometimes in life, we settle for something that isn’t what we really want. And then sometimes we determine what we want, and we go for it. So today is one of those days for me.
I recently shared a Blackberry Dumpling recipe found on Facebook that used a slow cooker to make. I am most, as a rule, a very impatient person.”Patience, honey, you need to learn patience,” my husband has told me more than once, hundreds of times, probably more like thousands of times during our marriage.   Sometimes I am patient, but not this morning. I went to the berry patch and picked another cup full of blackberries, a morning ritual for me before the birds wake up and eat them. 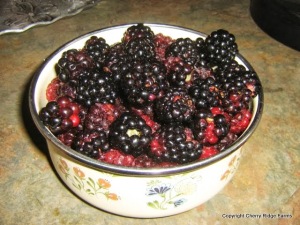 To Freeze Berries: I wash them, roll them in sugar, put them on a tray, place them in the freezer, and then bag them until I have enough berries to make Blackberry Dumplings.
I was in the kitchen preparing to make a blackberry dumpling recipe until I decided that the recipe I had was going to take too long to make, and  I wanted it  NOW. Not hours from now.  So,  I varied the recipe to suit me and predetermined my prerequisite as follows:

Place in a large 10-inch skillet, smash the blackberries moderately and bring to a rolling boil.

Now here’s the easy part! (Remember I like easy) use canned biscuits.
5 large biscuits from a can cut into quarters
(I used Golden Layer Grands Buttermilk just because I had them in the frig but any canned biscuit will do)
Place quartered biscuits on top of the boiling mixture, cover for 3 minutes, then turn dumplings over.

Should the syrup not be sweet enough, sprinkle with sugar. Nothing worse than a tart blackberry dumpling.
Serve with whipped topping or pour real cream over hot mixture or do like us kids back in the day,  when Dad had Half and Half in the fridge for his coffee, we used it.  Scrumptious. OMG. It tastes awesome even without the cream, but you know I am going to uses some.  You will too. Quick and Easy? You bet ya. This took less than 15 minutes to prepare.

So Here’s the thing: Don’t be afraid to experiment and improvise. This recipe suits me better now that I modified it. But first, I pre-determined what  I wanted, and that’s what I got.  Just what I wanted. Now go for it. You have nothing to fear but fear itself. And this method works in life situations, too,  not just in farmhouse kitchen recipes.