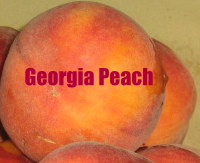 Have you purchased  your southern peaches from the road side stands yet?   Eli, a  friend of our’s who works with my husband,  sent to me a  bag of Georgia peaches.  I pulled one out, eyeballed it as if it was a gem, then breathed deeply its  fragrance then took a bite.   It was sweet and  the juice ran down my chin. “Gosh, that is good,” I told my husband,” sucking the juice back up.  “Far better than  any store bought peach.”   And that is the story of all homegrown produce don’t you agree?

I decided right then and there,  to give back to our friend and  make a pay-back pie and send him a slice the  next day as a thank you.   Once again,  I find myself  strolling down memory lane.

As I prepared my peaches for this pay-back pie, my memory wondered  back to one day in particular of my childhood. Smiling, I recalled the  day  Mom  brought a bushel of peaches in the kitchen and setting the basket on the kitchen floor, looked up and told my sister and I, “We are going to can these,” which meant, I soon found out was a tedious and tenacious task.    For some unusual reason though,  I distinctly remember, but I don’t know why,  I really wanted to learn how to do this, instead of usually being outside on the farm  with my animals enjoying  nature.

On that warm day, in the farmhouse kitchen, without any air-conditioning, maybe a box fan, the temperature was probably 100 degrees, no kidding, as  we prepared to process a bushel of   peaches following the Ball Blue Book directions.

Mom called my Aunt Sue, who lived next door, to help us. The four of us, Mom, Sue, Debbie and I  set up an assembly line with designated jobs. Wash, scald and chill the peaches and  remove the skins was Mom and Sue’s job.  Someone was washing jars taken from the smoke house  and sterilizing them, I think that was me and Debbie.  Next, the jars now filled with peaches had hot syrup poured over them,  I was helping to put the lids on.  “Wipe the jar rims before you screw on the lids or they won’t seal,” Mom instructed me.
Seven quart  jars  were placed in the metal rack and lowered  into Mom’s steaming  pressure canner:  Maid of Honor by Sears & Roebuck.   It  seemed  a very long time to build up pressure, but  gave  us time to prepare the  next batch.

By late afternoon, all our faces were flushed from the heat in the kitchen, my t-shirt was soaked from being at the sink washing jars,  but  we had a counter top full of Ball and Kerr, quart jars of beautiful, orange peaches. Whew. It took a long time,  but in the end it was  something to be proud of.  And the best part of all, besides the team-work,  is that all night long we heard the “pop, pop, pop” of the lids as they sealed and when we heard it, someone would call out, “There went another one!” The popping sound is  very gratifying in deed.   Truly, if you can- food, you know exactly what I am talking about. It is worth learning to can food,  just to hear that sound. Seriously. I’m not kidding, either.

Today, as I followed the  recipe taken from my Betty Crocker’s Cookbook, I reflected back on this now cherished memory  of canning peaches in the farmhouse kitchen of my youth. And that, to my recollection, was the beginning of my learning to process food.

I  wondered today,  as I scalded  the peaches in my new pot, then  quickly chilled  them, making  their skins practically fall off,  Who in the world ever figured this one out?  Did  someone say one day, ” Let’s see how we can get around paring them with a knife and have their skins fall off.”  Don’t know. Probably never will.  Would be useless information anyway. 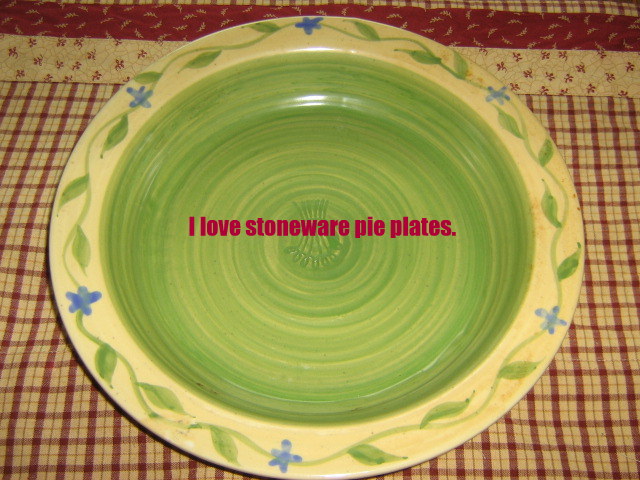 Okay,so I  must confess to you  that I did buy a store bought pie crust.   I do not have a flaky pie crust recipe and would love for you to share one with me. I haven’t been impressed with my pie crusts of the past and the flour makes such a mess. I have heard a crust made with lard is the best; don’t know.  I chose to make this project  easy, so I bought the crust,  or I might have talked my self out of it. But I am so glad I didn’t do that. It was worth every minute as I strolled down memory lane.

So here’s he thing:  Doing this little pay back pie, unexpectedly paid me back a hundred fold. I strolled down memory lane once again, returning to my roots and that made me happy and put a smile on my face.  And when  I shared a piece of pie with my husband, and tasted the fruit of my labor,  that really made me happy.